Get fresh music recommendations delivered to your inbox every Friday.
We've updated our Terms of Use. You can review the changes here.

MISSION TO MOUNT EVEREST by My Nada Brahma

by My Nada Brahma 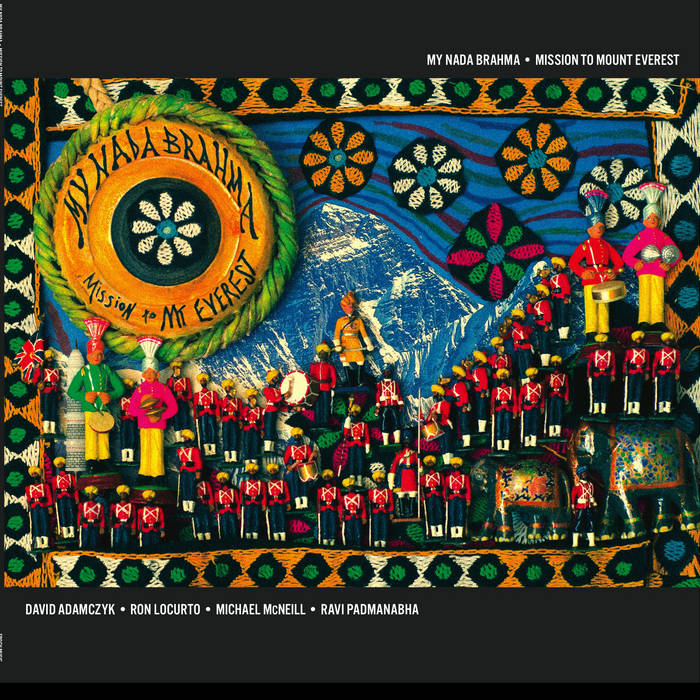 DOWNTOWN MUSIC GALLERY REVIEW
MY NADA BRAHMA [DAVID ADAMCZYK/RON LOCURTO/MICHAEL McNEILL/RAVI PADMANABHA] - Mission To Mount Everest (Epoch; USA) My Nada Brahma is David Adamczyk on violin, Ron LoCurto on guitar, Michael McNeil on harmonium and Ravi Padmanabha on tabla, percussion & most compositions. This disc came in the mail last week and I have been playing it ever since. I wasn't familiar with the other three members of the group but I do know the leader Ravi Padmanabha from several previous collaborations with Daniel Carter, Robert Dick, Tomchess and Brandon Terzic. The title track, "Mission to Mount Everest" is first and erupts from nearly the opening. Somewhere between John McLaughlin's Shakti and Mahavishnu Orchestra is where we find this fine quartet. Instead of depending on a raga-like structure, the group organically moves through hills and valleys, long and winding roads. Ravi switches between tablas and cymbals, creating a rhythmic center while the harmonium wheezes cosmic drones. There are sections where the violin and guitar play these tight, ultra-quick lines together in a Shakti-like way but they take their time to get there. The harmonium player also takes an occasion solo, spinning fast lines until the pieces settles down into a calmer section. The pieces here are long and weave their way through different sections. The quartet sound like they have been playing together for a long while since they are completely focused, tight and play their intricate lines as one force. Even sections that sound partially of completely free, always evolve into more directed regions. Instead of endless soloing and grandstanding, which is the way the original Shakti ended up, this band never plays with any predictable excess or direction. I always had a soft spot for the band Oregon, who combined jazz and ethnic influences in their own way. My Nada Brahma recognize how to tap into the same magical area. Don't miss out on this treasure. - Bruce Lee Gallanter, DMG
CD $10


BUFFALO NEWS REVIEW
Nada Brahma is the belief that the universe was created from the energy of sound. My Nada Brahma's music is a reflection of Ravi's love of Indian folk and Jazz music. The combination of tabla, harmonium, violin and electric guitar creates the unique sound of the group. My Nada Brahma explores a variety of traditional music forms found in Indian classical and folk music. Often compositions include open free improvised sections inspired by Ornette Coleman and Don Cherry. My Nada Brahma's new recording, entitled "Mission to Mount Everest", features 10 original compositions. All compositions are written by Ravi except one group collaboration.


Ravi Padmanabha is a multi-instrumentalist who specializes in percussion. He also plays drums in Family FUNKtion and the Sitar Jams. Ravi has studied tabla with many great masters such as Pandit Sharda Sahai and Pandit Samar Saha. Ravi has performed as a duo with Steve Baczkowski for many years. This duo has performed with William Parker, Robert Dick, Paul Flaherty and Jin Hi Kim.


Percussionist Ravi Padmanabha has been radically integrating Eastern and Western musical traditions in Buffalo for years now. Whether manning the drum kit with his Family Funktion & the Sitar Jams, working in various formats with saxophonist Steve Baczkowski, or playing the Indian tabla in a variety of ensemble formats, Padmanabha has proven himself to be a consistently dynamic, inventive and adventurous instrumentalist and composer. He is, in the current musician-friendly vernacular, simply a beast of a player.

Padmanabha’s latest project is one of his most adventurous yet, and has resulted in the release of one of the strongest instrumental recordings to emerge from Buffalo in a good, long while. My Nada Brahma is a Padmanabha-led quartet that performs pieces blending Eastern classical and folk traditions with Western-based improvisation. Founded on the belief, according to Padmanabha, “that the universe was created from the energy of sound,” My Nada Brahma benefits from the contributions of regional jazz and fusion-based virtuosos Ron LoCurto (guitar), Michael McNeil (harmonium) and David Adamczyk (violin), all of whom contribute on the new “Mission to Mt. Everest” album. Oh, and what an album it is.

Fans of John McLaughlin’s Shakti will take to this riveting display of dazzling virtuosity and compositional complexity like a drunk to his drink, but anyone at all interested in modern instrumental music should find much to love here. “Mt. Everest” represents that rare occasion when the technically brilliant and the emotionally compelling meet.

Bandcamp Daily  your guide to the world of Bandcamp